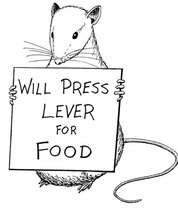 Skinner coined the term Operant Conditioning as a branch of Watsons Classical Conditioning and studied it by conducting experiments using animals, namely rats, placing them in what he called the "Skinner Box."

Operant Conditioning consists of changing behaviour by the use of reinforcements which are given after the desired response is achieved.

There are three types of responses that can follow behaviour:

• Neutral operants: Responses from the environment that neither increase nor decrease the prospect of a behaviour being repeated.

• Reinforcers: Responses from the environment that increase the likelihood of a behavior being repeated. Reinforcers can be either positive or negative.

• Punishers: Response from the environment that decrease the probability of a behavior being repeated. Punishment weakens behaviour.

Skinner demonstrated the effectiveness of positive reinforcement through his experiment with the Skinner boxes and hungry rats. Inside the box was a lever and when it was accidentally pressed by the rats as they moved around inside, food would be dispensed into a container beside the lever. The rats then learned that by pressing the lever, they would receive food and would automatically go straight to the lever once put inside the box. By doing this, a cause and consequence scenario was introduced and ensured that the rats would repeat the action.

Behaviour can also be strengthened by the removal of an displeasing reinforcer. When this occurs it is referred to as negative reinforcement because it involves the removal of an unfavourable stimulus considered as a reward to the animal. Skinner presented how by negatively reinforcing a rat through exposing it to a distressing electric current, the rat would discontinue its behaviour due to the fear of re-experiencing the stimulus. When the rat moved inside of the box it would accidentally knock the lever and this would turn the electric current off. After repeated exposure to this, the rats learned to go to the lever instantly to avoid the consequence of the stimulus.  This ensured the rats would would continue to carry out this action.

Strengths & Weaknesses of Operant Conditioning Theory
Like all of the learning theories out there, Skinners operant conditioning theory has both positive and negative aspects. There are many strengths to this theory, as well as weaknesses.

Strengths
Operant conditioning has practical advantages, specifically in the area of education

Skinners operant conditioning is a type of behaviourism theory. Behaviourism essentially holds that only what can be directly observed and measured can be studied in a scientific way. Out of the behavioural tradition grew the belief that development is observable behaviour that can be learned through experience with the environment. Operant conditioning demonstrates that it is part of the behaviourism theory because it focuses simply on the physical reactions of the participants to stimuli. Furthermore the inner workings of the mind are not considered in this theory because Skinner felt one cannot fully understand the mind as it is not directly observable, whereas reactions in a experimental setting are.
Powered by